I went on my first official ride yesterday! I know, I know… I’m way behind. During the ride I felt like I couldn’t find a comfortable position for my hands/wrists and also my bottom is sore today! I went for another short ride today with a decent sized hill and didn’t notice the issue with my hands/wrists but did notice my bottom… this will get better- right?!?!

You’ve got a fairly typical drop bar road bike so I can’t give you any specific hand position recommendations to help fight hand/wrist pain. My bike came with flat bars, Fuji called it a performance hybrid back then but they call it a flat bar road bike now, and the flat bars just did not work for me at all if I rode more than 20 or 30 miles. You can move your hands around a little bit on a flat bar but one hand position is pretty much the same as all other hand positions on a flat bar! After trying some alternatives I ended up with a Jones Loop H-Bar. Mine has padded tape on the forward part of the bar and ergonomic grips on the ends but otherwise it looks like this one from the Jones website: 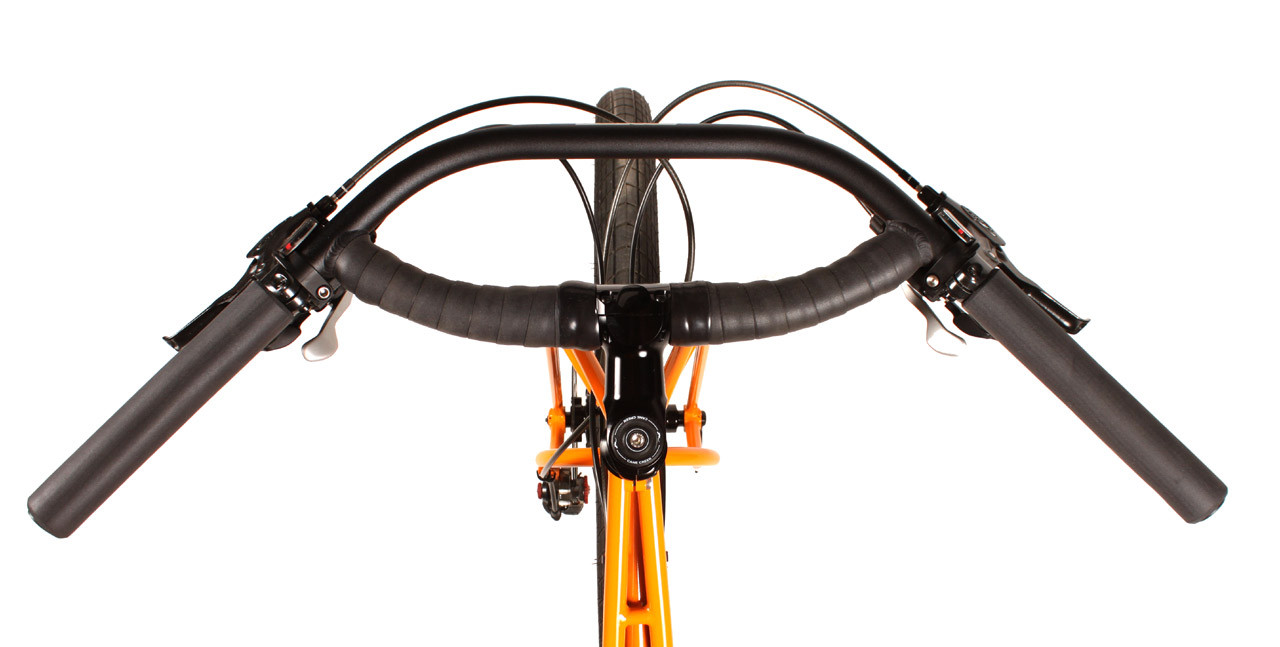 And while your bars are quite different the video below shows how you can move your hands around on this bar to help with hand pressure, get a more aero position, and get better steering control in soft conditions. The last is not something you are concerned about on RAGBRAI unless you opt to take the gravel loop! But it will give you an idea about what various hand positions can do for you and perhaps others will chime in with comments specific to drop handlebars.

I have no confidence that I know how to successfully post a link to a video so if that does not work you can see it on the Jones Loop H-Bar web page….

The problem with clipless pedals as seen on the “Burma Shave” signs at RAGBRAI last year or the year before:

Those new Lycra shorts
sure make you look hip
until you fall over
because you forgot to unclip!

HAHA! I’m guessing that the “you’ll remember to unclip after the first time you fall” rule wont apply to me… I see many abrasions in my future -haha

Great advice from everyone, I’ll add my little bit, lift your butt off of the seat to change position, don’t scoot around on the seat. Vermont’s Finest Bag Balm has always been my go to butt cream.

My finest RAGBRAI moment occurred while stopping for Beekmans one day in 2013. I unclipped my left foot, rolled onto the shoulder, leaned left, and just before the bike stopped it hit a pebble? I dunno exactly what happened but I was prepared to go left and the bike went right and I toppled over into the ditch. It was a great laugh for any of you who witnessed it and neither I nor the bike was harmed in the filming of this misadventure! Plus I had Beekmans to comfort my wounded pride. But now I always unclip both feet, you can ride with both unclipped if you need to.

I bought some sandals! I haven’t bought the pedals yet so I haven’t removed the bottom area of them but I rode my last two days with them and I definitely can tell a difference! They aren’t open toed though, and I did notice my toes getting smashed towards the front a bit, and they were a little sore towards the end of my ride yesterday. I’m sure once I don’t have the straps on my pedals pressing against the front of my shoes, it will help.

Today my nemesis was the wind! I felt like I was going to get blown over at some points! How do you handle it?

Awesome! Last year I planned to do the first day but I was underprepared and decided to try the second half but after about 12 miles I was out and under a shade tree waiting for my hubby to pick me up. I rode more this week than I did last year before RAGBRAI… not sure what I was thinking last year. I had my team cheering me on telling me that I would be fine! I’m glad I tried though. I got a little taste of the RAGBRAI atmosphere and told myself that I would do it this year! I bought a new bike- that was the best thing I did! I’m still very nervous for this year. I know it’s going to be hilly and that scares me!!

The sandals I bought are Nashbar Ragster II Cycling Sandals.

Me and wife also got new bikes about 2 weeks ago. I got a trek 1.2 and she got a lexa

The wind is like one long hill. You try to find a comfortable pace in the face of the wind and just pound out the miles until you reach the end or at least that turn that makes the headwind into a crosswind. A crosswind will threaten to blow you over but with more experience you will learn to deal with that. Complaining about the wind to your fellow riders may help and you will get a lot of support for your opinion of it. Some find that cursing helps….

Old ragbrai saying, the wind doesn’t blow…it suc#s :-) Hate to say one of the worst is right off the bat in Glenwood. It gets better after that, according to TJ the second half of the day is much easier. Loess Hills are not our friends half the time.

Cycling sandals are a great choice. They seem to be a favorite on RAGBRAI. The clip-in pedals will help a lot also. Try a couple of rides where the main objective is to clip in and out a bunch so it becomes nearly automatic. It’s a good way to avoid that embarsing and potentially painful fall when coming to a stop (or starting). Cliping out always seems to work best with the pedal at the bottom of the pedal stroke.

You are likely planning on this already but always where socks with sandals if for no other reason protection from the sun. The skin on the feet can get fried very easily. That would be very painful.

When I got my kids going clipless, I threw their bikes on the trainer in the living room, for a few weeks when they were just sitting around watching tv I would have them on the trainer clipping in and clipping out until they were unconsciously unclipping, clipping in I wasn’t as worried about but they learned that quickly also.

It really only took a few episodes of their tv shows to get them doing it efficiently but I kept forcing it.

They both still fell a couple of times for not unclipping but they did really well and I do seethem unclipping without thinking about it, so it appears that the training has set in.

Also the foot that you clip in and out at a stop sign should be your dominate foot, (not necessarily the same as the dominate hand), most people would be on the right and in the US I would always suggest if you have a choice for it to be the right foot, so that you lean away from cars on the road, I personally do left and I am always a little closer to cars at stop signs than most others.

: always wear socks with sandals if for no other reason protection from the sun.

Thanks for the confirmation. Every time I wear socks with my sandals, my daughters threaten to call the Fashion Police! I intend to print out your post and show it to them the next time they tease me.

Sorry to hear you can’t make it to RAGBRAI this year. Enjoy the Bacoon Ride.

See you along the I-O-Way next year.