Hi! According to Lance’s twitter account he is riding in RAGBRAI this year. Does anyone know what days he will be there yet? In the past he has shown up at the Expo the night before the start and then done a couple of days. Was wondering what his plan was for this year.

I’ll call and ask Lance about his plans!!!!

Cool picture Mich! All I have to say is, On your left, Lance!

igor: Cool picture Mich! All I have to say is, On your left, Lance!

That was RAGBRAI 2006. When Lance rode past me, my first thought was, I’ll try to catch him. My next thought was, NO, your too old and too fat to catch Lance!!!! A short time later he was sittin in a yard along the route drinking a Budweiser. I really did catch up to him, LOL!!! My friends and I both stopped, then this picture happened!!!

heard he rode and so did Matt Kenseth, Jimmie Johnson and another NASCAR driver. And someone on our team had a Lance siting in a resturant

Let’s keep in mind Lance Armstrong made his legend on lies and ruining anyone who got in his way. I am glad I did not see him on an otherwise great RAGBRAI.

Lance Armstrong is welcome on my RAGBRAI at any time. He has raised millions to fight cancer which says it all for me. I will add that I care nothing about the ethics of professional bicycle racing.
http://www.desmoinesregister.com/story/life/living-well/ragbrai/2016/07/27/lance-armstrong-returns-ragbrai-route/87622802/

Let’s keep in mind Lance Armstrong made his legend by coming back from near death, beating cancer, and competing in the TDF. What he chose to do with his professional career after that I’ll leave for another debate.

Lance is always welcome to stop by Bike Army for a beer. Since one of our members pit crews at the ARCA level, he’s more than welcome to bring his NASCAR buddies with him…

Lance can draft off of me anytime he feels he needs to.

Lance became a polarizing figure because of the choices he made. I can no longer revere him as a role model but I have no problem riding across Iowa with him. Like anyone else who has fallen from grace he is redeemable — if he chooses to be. He’s been on at least three RAGBRAI’s that I have ridden and I have yet to catch so much as a glimpse of him.

In spite of all the controversy Lance is one of the greatest cyclists of all time. Loved watching him race. I was heartbroken over the doping but I still get chills seeing reruns of him winning in the mountains. We were lucky to have witnessed it.

Lance is a cheat and a liar. Role model? For what? Douche-bags?

The same people dissing Lance would probably love to play softball with Mark McGwire, admitted steroid user, who by the way is a freaking coach for the Padres. Lance is permanently banned from sanctioned competition or competitive involvement in any Olympic sport. If MLB, NFL, NBA and NHL had anti-drug regimens even half as strict as professional cycling, a huge number of players would be subject to their lame “sanctions”, which amount to nothing more than a wink and a nod.

On a level playing field Lance probably would have won the T de F, but no such playing field existed. Guilty? yes. But no more guilty than the other cyclists of the era, or McGwire, Sosa, or any of the more than TWO HUNDRED football players suspended in the past five years for drugs. Yes, there have been almost 200 drugs suspensions in the NFL in the last five years, and you would have to be a complete idiot to be caught because they basically know when they are going to be tested.

I like Lance. We have much in common. We both like beer. We’ve both ridden RAGBRAI. We both met up in 2006. We’re both cancer survivors. We both had surgery to remove cancerous body parts. We’ve both used PED’s (my drug of choice was several doses of steroids for Lefty). We both were stripped of our Tour records. You will not find either of our names listed in official Tour de France records!!! I still like Lance but I don’t try to convince others!!!
BTW, RAGBRAI don’t care!!!

Michrider wrote:
We’ve both used PED’s (my drug of choice was several doses of steroids for Lefty).  We both were stripped of our Tour records. You will not find either of our names listed in official Tour de France records!!!

Well, I’m not in the Tour de France records either; but someday that will change.  I’m waiting for the powers that be to remove the records and palmares of all the riders — not just Lance — who tested positive during the Armstrong era; then they will need to find any riders left in the peloton who were clean and elevate them, ex post facto, to the podium.  And since it is pretty much general knowledge that no one was 100% squeaky clean, they will eventually work their way down to people like myself and Michrider.

And since he has admitted PED usage as well, that will leave just me….. 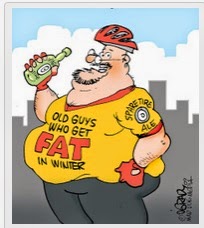