I’m sure this is not the first posting of this classic video of RAGBRAI IV. It’s about thirty minutes of 70s retro bike gear and the an example of Iowa’s never changing great hospitality. The great ride across Iowa has come along way. Enjoy.

“………….nothing you smoke, nothing you drink can give you a high like this..” Said a biker in the video. Ball caps, short shorts, tennis shoes and the Schwinn Varsity were in majority. If you wonder why so many are carrying their bikes in the beginning of the video it is because of the goat head thorns in the start town of Sydney. Thank you ESchiers for this posting.

ESchiers,
What an awesome video. Thanx so much for sharing this.
There are so many cultural, physical, geographical differences from IV to now.
For me, the most striking take-away is more global; more philosophical.
Karras, while speaking w/Kaul, referred to “apprehension” about the ride.
He said SAGBRAI was awful, for RAGBRAI III his pre-ride apprehension was eased and for RAGBRAI IV, he felt like they “we’re doing it right”. Kaul later iterates that “the chemistry is just right”.
And it still is. D

Despite the changes in appearance, hairstyles, etc., I was most struck by how the overall vibe that was portrayed seemed almost identical to vibe of today. Remember the term “generation gap” that was widely used back then? It was not existent in the video, with young and old riders interacting as peers, equals in a rolling community. Same as today. Something about RAGBRAI creates an egalitarianism, camaraderie and shared purpose that spans across the ride, and it’s of the things I love most about RAGBRAI.

Wow! thanks so much for sharing ESchiers. I had not seen that before. The cycling culture of the 70s has changed a bit and I can’t help from feeling a little nostalgic about cycling in the 70s. Back in 1973 I was a college student in northeast Missouri and the 1972-1973 winter was brutal. On a cold winter day a friend and I came up with the ideal of riding our bikes to sunny southern California during the summer break. I rode an early 10 speed, a 40 pound steel Schwinn Varsity that was made in Chicago. Soon after the semester ended we went to the local Walmart to acquire our touring gear. Since panniers were unknown to us back then we purchased aluminum framed backpacks to carry most of our gear in. We also purchased rear book racks to attach our cotton sleeping bags to and since bikes didn’t have water bottle mounts at that time I purchased a round metal canvass covered half gallon canteen. My cycling kit consisted of blue jean cut offs and cotton t-shirts and since the norm for peddles at that time were flat, I wore a pair of canvass tennis shoes. We departed Kirksville in mid May and after 3 days of riding we crossed the Missouri River into Kansas at Atchison. We rode a few more miles and sit up our tent. A severe storm happened that night and we managed to survive but our 2 man pup tent was destroyed and it’s amazing how heavy a soaked cotton sleeping bag can become.
We continued on riding through Kansas, the panhandle of Oklahoma, and Texas and across New Mexico. Since we no longer had a tent and I’m not sure if they even had sleeping pads back then, at least we didn’t, and were on a high desert, it would get in the upper 90s during the day and frost at night. I’m amazed at what you’re able to endure when you’re only 19. I remember it getting dark one time before we were able to find a camping spot and then after falling asleep being rudely awakened by an unbelievable loud roar and the ground shaking. It was then that I realized we had camped only a few feet from a rail road. We crossed into Arizona and endured triple digit heat. I recall stopping at an ice cream place in Apache Junction that boasted of serving huge malts. I ordered the largest malt available and was questioned about my ability to consume it. I responded by saying I didn’t believe it would be a problem. He rolled his eyes and proceeded to make me the biggest, and the best malt I’d ever had. A few minutes later I was back at the counter telling him how good that malt was and could I have another.
We ended up enjoying a week on the beach at Oceanside, California. One day we returned from a swim and were sitting on the beach when a cute girl with a small toddler approached us and ask if we could look after her child while she went for a swim? This was the early 70s so she was also topless, how could we say no.
We had rode over 1700 miles and had averaged almost 75 miles a day.
In 1976 the same year as RAGBRAI IV the same friend and I rode to Nuevo Laredo Mexico but this time I rode a Schwinn LeTour with panniers, water bottles, even toe clips and cycling has never stopped evolving.

Wow! thanks so much for sharing ESchiers.

THANK YOU for sharing! What a wonderful story! Ah, I remember doing similar things at about the same time. So good to know that it was not uncommon! I just hope that today’s youth are so inspired! If not, they’ll just have to put up with us geezers continuing to do crazy things!

Thanks so much for posting this video! I remember RAGBRAI when it was first starting out. My father would read the paper and say to me every year Mandy, why don’t you do this bike ride? So then I would beat him to the punch and say yeah I’m gonna do it this year. Never did until I was 40. He passed away when I was 29 so I never got to share my RAGBRAI stories with him. Watching this video makes me wish I would’ve done it sooner. But then again, I don’t know if I’d be able to ride in regular shorts and without a helmet! LOL

Exceptional video! Undoubtedly, time has created a legacy that TJ and his crew have continued to nurture. Thanks again for allowing us to add to that history every summer.

I still have the t-shirt but it has shrunk, is pretty thin and there are some holes but Froggy can wear it. I too was on a Schwinn Varsity, purchased in 1972, which when I donated it to the Salvation Army weighed 36 pounds including the back rack. 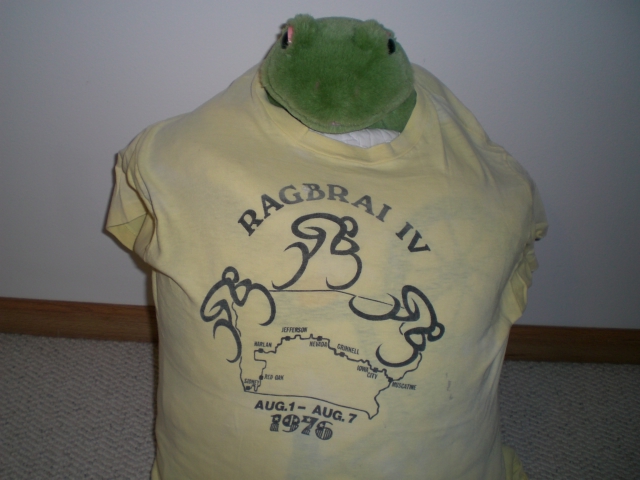 Awesome t-shirt Sandaltan! This makes me wonder if there are still any riders out there that have rode every year of RAGBRAI? I was late to start riding RAGBRAI as well Amanda, my 1st wasn’t until 2003, but I’ve hardly missed one since. Kevin, I think you’d agree it’s Those early adventures that become so in bedded in your mind that they soon end up becoming very cherished memories.

I hadn’t heard about RAGBRAI back when this video was produced. At the time, I was wishing that I could be with the thousands that were crossing the country on that first Bikecentennial trans-Am adventure.

I learned about RAGBRAI in 1979, having seen a small blurb about it in a sidebar in U.S. News & World Report (I believe). In response to those few paragraphs, I contacted the DMR to sign on for RAGBRAI VIII in 1980, drove to the start town (Glenwood) from Idaho (where I was stationed in the Air Force at the time) with my wife and 14-month-old daughter (who rode in a seat I’d customized to provide shade and other amenities).

Fast forward to 2019. I travel to Iowa annually and ride with a good friend I’d met on the ride back in 1980. (He’s been riding it since SAGBRAI in 1974.) Our team spans multiple generations, among which I am one of the “geezers.”

I still can’t think of anything I’d rather be doing during the last full week of July!

That is awesome! Did you see yourself in the video?

I still have the t-shirt

Your t-shirt reminded me that up through RAGBRAI IX, the ride included dates in August (including the first year which took place during the last week of August).

I looked for a familiar face in the video but I only know four people on that ride, two of those I discovered in the last year. Not sure I could recognize myself from that long ago.

Great find, thanks for sharing!

If you are old enough the video is a fascinating glimpse of your youth, whether you ride a bicycle anymore or not. I am old enough to have ridden the first RAGBRAI but even though I lived in Wisconsin and Illinois the whole time (excluding one summer spent in England) I was not destined to hear of the ride until 40 years later. My first go at it was XL and even though we did only three days of that one it was more than enough to get me hooked!

Things I take away from the video:

Walking up gravel hills goes well past last year’s loop through the Loess hills, it started at least as early as RAGBRAI IV.

When Karras was 16 he would have sold his mother to go on a ride like this!

Kaul claimed he would tell complainers that “no one invited you”. RAGBRAI don’t care? RAGBRAI has never cared!

Kaul also claimed that he enjoyed the having done it, more than the doing of it.

One passenger on the SAG wagon said that they had to take it because “our seats don’t match the bicycle seats anymore!” Training for RAGBRAI is all about the saddle time….

Great video, y’all should check it out.