We all need a good laugh!

With all of the gloomy and depressing news, statistics, and general BS floating around the Twitterverse, it’s about time we do something to lift up our spirits.

Why do some bikes have kickstands? Because they are too tired to stand up by themselves (rim shot!).

See you along the I-O-Way next whenever.

[quote quote=1323355]Although Princess Amanda can be Queen anytime in my book of Card Sharks, BB & TGW are the true Kings of this Game Show! Thanks so much for your contributions to this Tournament of Laughs![/quote]

I’m so glad that you and the rest of my Ragbrai brethren and sistern are enjoying this punfest in these crazy times. A little humor is like chicken soup. It can’t hurt and may cure whatever ails you!

I’m not a headline chaser and don’t mind sharing the spotlight with BB and LCM. Sometimes, it takes two and the more the merrier. Three’s a crowd — NOT! Get the picture? 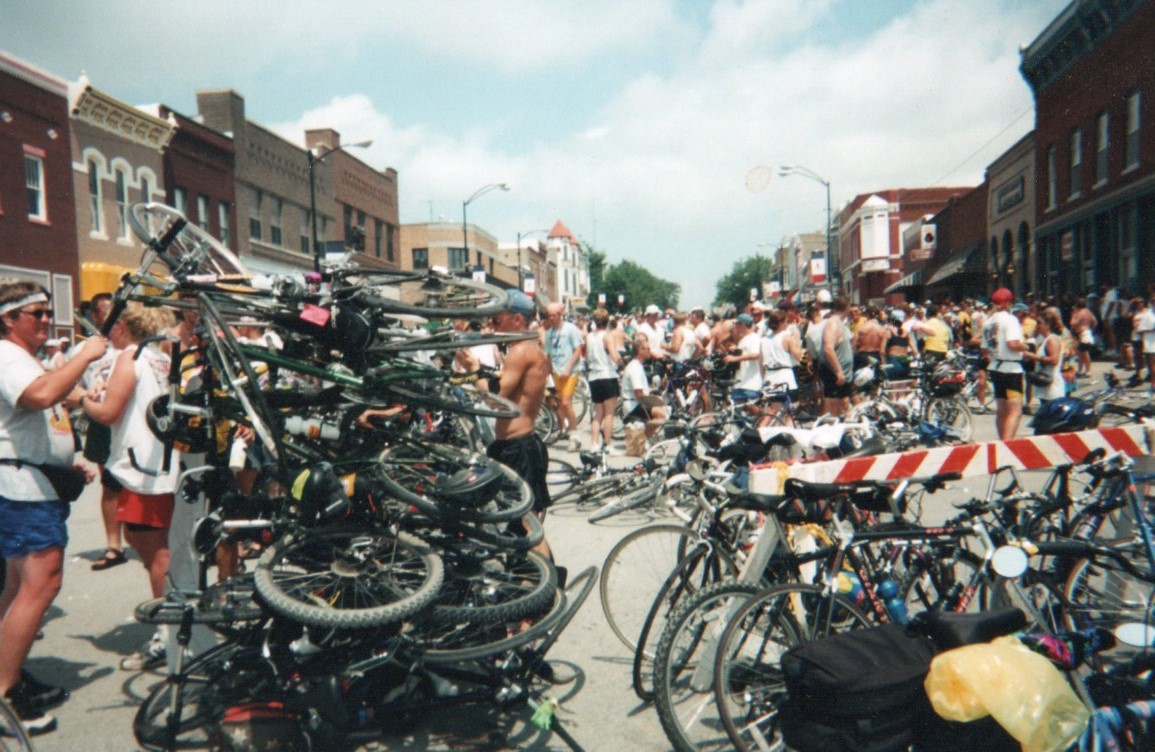 I got the picture! That’s a great shot! I enlarged it as big as I could, examined it under a magnifying glass and squinted until my eyes hurt. But I still couldn’t find MY bike in the picture.

You can’t miss it. I rigged my bike so that it converts into an Army cot. At the end of a long day’s ride, I wheel it into my tent and doze off in comfort. I do this every Ragbrai and on every multi-day excursion: ride; sleep; ride; sleep; ride; sleep. I wake up every morning, refreshed and ready to go again. Its my sleep cycle!

Wow! This thread has taken more twists and turns than Burlington’s Snake Alley and San Francisco’s Lombard Street. If you’re ready for a change of pace, line up here and let’s roll.

Ronald was a big braggart. He boasted how he was the best at everything, how he had the most of whatever, etc etc etc. Regardless of the subject, if it concerned a positive attribute, Ronald always claimed he was the superlative.

For example, Ronald loved to brag about his unicycle. He was the best unicyclist ever, who rode the tallest unicycle over the farthest distances for the longest length of time. His unicycle was the most expensive one, since it was made of the finest materials. You get the picture?

People were sick and tired of Ronald’s braggadocio. One day while riding his unicycle, Ronald hit a bumpy patch of road, lost his balance, and fell, breaking his arm in the crash. That ended his bragging!

People cheered, now that Ronald was knocked off his pedal stool. ? (rim shot)

I’m off to the Internet-challenged hinterlands to visit the Woo children and Grandwoos over the long weekend. So here’s one for the road.

I won’t be biking on this trip, though. Last week, I made the mistake of riding without wearing biking shoes or sandals. This really tore up the soles of my feet.

I learned my lesson the hard way. Bicycle pedals are not designed for bear feet, only human feet. ? (rim shot)

Don’t let TGW fool ya. He is going to be spending some time in the punitentiary.

[quote quote=1323503]Don’t let TGW fool ya. He is going to be spending some time in the punitentiary.[/quote]

Watch your step, Larry, or you’ll be hearing from my lawyers: Dewey, Cheatum and Howe. They are ably assisted by Perry, mason-turned-lawyer, and Owen, martial arts expert. They are the best L.A. Law-yers, bar none. I’ll see you in the people’s court and, if I am an accurate character judge, Judy will rule in my favor. ? (rim shot)

There were three things in life that Reid really loved. He called them his Three B’s: biking; beer; and babes. One day, he decided to indulge all three at once.

He phoned Kate. “Let’s go biking tomorrow morning around 7:00 and then stop at the Dew Drop Inn for a few beers. We have to be finished by 11:00, because I’m visiting my parents in their retirement home in the afternoon.” Kate agreed to the arrangement.

Shortly thereafter, Reid phoned Edith. “Let’s go biking tomorrow afternoon around 1:00. I have some office paperwork to finish up in the morning, but I’ll be done by 1:00. After we finish riding, we’ll go to the Dew Drop Inn for a few beers.” Edith said, “It’s a date!”

The next day at 7:00, Kate and Reid met and went for their morning ride. By 11:00, they had finished their ride and were enjoying their beers at the Dew Drop Inn. While Reid and Kate were quaffing their brews, who should walk into the Dew Drop Inn but Edith, intent on filling her “water” bottles with cold liquid refreshment for the afternoon ride.

Edith spotted Reid and Kate. In a huff, Edith said, “I thought you had work to do this morning and that’s why we planned an afternoon bike ride!”

Kate angrily said, “I thought you were visiting your parents this afternoon and that’s why we went riding this morning!”

Realizing that they’d been played for fools, both ladies poured their beers on Reid’s head, dumped him on the spot and stormed out.

Reid then realized the truth of that old saying, “You can’t have your Kate and Edith too!”

? (rim shot, with apologies to The Statler Brothers)

This isn’t a joke, but it made me smile. I got on the road this morning in the dark. I set my Nite Rider Lumina 1200 to a steady medium beam. About three miles into the ride I noticed a pickup truck about to enter the road ahead of me on my right. The driver let me pass in front of him before pulling onto the road, and I waved my thanks. I had to stop at the next traffic light, and the pickup truck pulled up next to me. The driver said my light was so bright he thought it was a motorcycle. I laughed and said, “Good, I like that. That’s good!”

When I ride in the dark I choose a steady beam just for this reason. I think motorists give me more respect if they think I am riding a motorcycle. I used to ride home from work in the dark three or four days a week. With a bright flashing light, motorists still assume that I am a slow cyclist. They pull out right in front of me even when I am going fast.
In the daytime, I switch to flash mode to draw more attention to me. Maybe it’s due to the recumbent’s smaller frontal profile, but I’ve had two motorcar collisions where the drivers said they didn’t see me. IN THE DAYTIME!

One of the reasons I use bright lights is because I didn’t have one at Ragbrai 2012 and nearly crashed. The temperatures were so hot that year I got on the road for century day by 0430. I road next to a guy with a light, but it wasn’t very bright and I only saw the pothole in front of me just barely in time to avoid it.
At the start of Ragbrai 2013, I had a Nite Rider 650 and had a similar reaction as the pickup driver. Starting in the dark again, and just rolling through the start town, a rider ahead of me called out, “Car back!” I looked back and saw nothing but cyclists. I figured that it was my light that was mistaken for a car light. Sure enough, the cyclist was surprised when I got alongside her.
The moral of this story is: if you are riding in the dark, use a good headlight with a steady beam!
Stay safe!

Whoever invented wheels for a single speed bicycle was just plain shiftless and lazy. All he did was cut corners. ? (rim shot).

Earlier in my working life, I had a job working in a bicycle factory. I started out working on the two-wheeler assembly line, putting on the rubber grips, but I couldn’t handle the work.

The boss shifted me to another section of the line, where I installed ventilated discs on the front and rear axles.

Because I took too many breaks, they moved me to the safety area, where I installed material to improve visibility. Upon further reflection, the boss realized that this wasn’t the right place for me.

When the boss wanted to transfer me from the two-wheel bicycle line to the tricycle assembly line, I kicked up a fuss and took a stand. I felt disrespected and wasn’t willing to be treated like an extra wheel, so I asked to be transferred to an office job.

Guess what? I’m now the company’s spokesman. I’ll probably retire from this job and pedal off into the sunset. ? (rim shot)

As we all know, Ragbrai attracts riders from across the country and around the globe. It is truly a wide world of sports.

Several years ago, I had the pleasure of riding many miles alongside Chang, a bicyclist from Beijing. We discussed all manner of topics: food; culture; religion; politics; and, of course, bicycling.

The ride was going smoothly, when Chang’s front wheel got caught in a road crack that was just wider than his tires. With the tire jammed, Chang came to a crashing halt and he flew over the handlebar.

Fortunately, Chang wasn’t seriously hurt. He did, however, skin his Chi-knees. ? (rim shot)

Back in the 1950’s, when I was just a wee little Woo, I learned how to ride a bicycle. One day, early in the process and right after Daddy Woo took off the training wheels, I was practicing riding downhill and applying the coaster brakes.

I rode down the grassy hill in the backyard behind our house. I must have been going way too fast, because I skidded on the damp lawn when I applied the brakes.

I plowed through the rose bushes and crashed right into the brick garage wall! I wrenched my knee, turned an ankle and got all scratched up by the rose bush thorns.

Why am I telling you this tale of woe over 60 years later? Back then, I didn’t have Facebook or Twitter. ? (rim shot)

I don’t know about you, but I’m getting kinda tired of people nagging me to save the environment. I already traded in my gas-guzzling pickup truck for an electric car. I sold my Harley motorcycle and bought a Trek 24-speed bike. I swapped my gas-powered lawn mower for a battery-operated electric model. I replaced my oil furnace with solar heating panels on the roof. I even got rid of the old-fashioned incandescent light bulbs and exchanged them for those squiggly ones, before switching to the new LED bulbs.

I’ll tell ya, I don’t mind doing my part to save Earth, but I draw the line at demands to turn off lights to save the environment. Last week, I was biking in the early evening when night began to fall. I didn’t turn on my electric Nite Rider 1200 headlight and hit a huge pothole.

? (rim shot, from my hospital bed)

Here’s a question for you history buffs.

Did you hear what happened to the former French Emperor and General? While riding in a precursor to the Tour de France, he had a really nasty accident. The crash nearly tore Napoleon’s bones apart. ? (rim shot)

The forum ‘RAGBRAI XLVIII – 2020’ is closed to new topics and replies.