What's with the beaded roadkill ?

First time RAGBRAI for me and I’m curious about the Mardi-Gras bead-festooned dead animals along the roadside, with beercans in their paws and wristbands.
Where’d that come from ?

That is most likely the work of Team ROAD KILL.

I’ll need to debunk this myth once and for all. I’m on Team Road Kill. No, its not our riders that do this. People just assume it is because of our name. Its almost sad to clear this up but most riders don’t read this forum so we’ll still get the credit/blame.

Sorry, mootsman, but you’re only partially correct.  Team Roadkill did start the concept.  When I rode pre-2000 we were seeing this already — dead critters that were originally just tagged with “Team Roadkill” stickers — no beads, though.  The Mardi Gras trimmings came along later, and probably were done by someone else.

I’ll accept your statement that Team Roadkill isn’t responsible for this any longer; however, like Pandora’s box, once you let the genie out of the bottle there’s no putting him back.  It’s gone beyond viral, and we’ll probably see dead possums, raccoons, skunks, woodchucks, and what-have-you decorated with beads and beer cans on the RAGBRAI route so long as the ride survives.

Team Roadkill was identified as carcass decorators in the book “RAGBRAI: America’s Favorite Bicycle Ride” (2013) by Greg Borzo. I think this year’s addition of the RAGBRAI logo on the Tailwind beer cans made it either funnier or creepier, depending on your viewpoint! I sure hope whoever is doing this is wearing disposable latex gloves.

Sorry but you both fell for the myth. The decorations are the beads, not the stickers. There are members of our team currently that go back to the 80s. If this isn’t a myth talk to one of them, I have. But we get the blame only because of our name. Not us. Greg B should have also. Maybe talk to Team Bead W**** as their other big event is MG in New Orleans where they gather beads first.

The Mardi Gras bead thing was really big about 10 years ago, so it probably started a couple before that. At one time there was another group that stuck forks in road kill. the old “stick a fork in me, i’m done” which would go back a lot farther than the beads.

It is just another silly tradition that helps make RAGBRAI RAGBRAI!

The last couple of years it had almost seemed to have died out. I was happy to see it return to some extent this year. I don’t know when the practice started or peaked or who was responsible since I only go back to 2012 but it was quite a popular “ritual” the first few years that I rode.

I just know its not Team Road Kill. Even those stickers bb mentions are stickers we give out to other riders. We don’t waste them on dead animals.

I get it’s a RAGBRAI tradition and all that, but I hate seeing the litter in the roadway that the responsible parties will never clean up.

Last year we overnighted at Sigourney on Thursday night. After the ride, I drove to Oskaloosa to visit my Dad. On the way vack to Chicago, I drove through Sigourney and followed the Ragbrai route to Riverside. A lot of the signs for Rabrai were still up, plastered to telephone poles and buildings, or stuck in the ground along the roadway. They weren’t looking so good by then.

I’ve often wondered if the mass amounts of signage was retrieved once the ride was complete. Guess maybe not all is, although that’s not really a surprise. And although the decorations to road kill are also adding to the garbage along the route, it is humorous to see.

At least most roadkill is removed by state and county highway departments. I assume they’d pickup the beads at the same time rather then separate them out.

Since adamant denials have been issued and no one is fessin’ up, this issue is officially an unsolved mystery.

I first rode RAGBRAI in 2010. The first few years the road kill had beads and stickers on them.
A couple of times the road kill I saw looked like the same road kill that I saw the day before,like someone moved it to the next days route. The beaded road kill seemed to disappear for a few years only to return again. I like addition of the beer cans and the wrist bands. I am sure it is meant to be all in good clean fun. Needs a little sign that says don’t drink before you cross the road

Next year on RAGBRAI …. 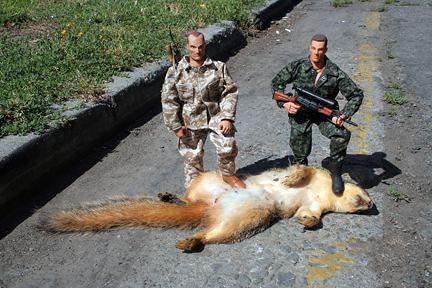