The hometown of the man who set the world record for the longest bout of hiccups. The National Hobo Museum. A Catholic shrine that claims to be the world’s largest grotto (nine of them, actually). A rural village, billing itself as the “Hometown to the World,” where Hasidic rabbis mingle with immigrants from around the globe.

These are among the only-in-Iowa wonders among the newly announced pass-through and meet-up towns along the route of 49th edition of the Register’s Annual Great Bicycle Ride Across Iowa..

The RAGBRAI route is still subject to revision pending an inspection ride by RAGBRAI officials and guests in June. Detailed route maps will be released in June or July.

Here is a look at each day.

More: What to know about the towns on RAGBRAI 2022, from Sergeant Bluff to Lansing

Day 1: The home of the hiccup record-holder

Day 1 will feel a little like 2006. RAGBRAI will go through the same pass-through towns as that year, when the day also started in Sergeant Bluff and ended in Ida Grove.

Pass-through town Anthon was home to Charles Osborne, who held the Guinness World Record for the longest continual hiccup attack, which lasted 68 years. Osborne started hiccupping in 1922 while attempting to weigh a hog before slaughtering it, according to the “Guinness Book of World Records.” He never found a cure, but led a normal life, married twice and fathered eight children. Osborne’s hiccups finally went away in 1990, one year before he died at age 97.

Day 2: Pass through the “Popcorn Capital of the World”

Look closely at the cornfields around Schaller and you may see the makings of buttery popcorn. Schaller is the self-proclaimed “Popcorn Capital of the World,” and popcorn brands Bango and Jolly Time used to have facilities there. Jolly Time Popcorn is headquartered in nearby Sioux City and still has growers in the Schaller area. Schaller celebrates magical poppable corn with its Popcorn Days festival each July.

Presented by HED Cycling and Bike Rags, Inc this full day option is 48 miles with 815 feet of climb. You’ll get your fix of several different types of gravel along this year’s route that runs parallel to the paved route. It will be easy to hop on and off at your leisure as the route makes stops in Rolfe and West Bend. Gravel patches will be handed out along the route (location TBA).

Day 3: Get a look at the Shrine of the Grotto of Redemption in West Bend

Rolfe is the westernmost point on the Three Rivers Trail, a 32-mile gravel rail-trail route from Rolfe to Eagle Grove.

For the third time in the last 12 years RAGBRAI will roll by the Shrine of the Grotto of Redemption in West Bend. The Rev. Paul Matthias Dobberstein began building the Roman Catholic shrine in 1912. He died in 1954 and never lived to see its completion in 1964. The nine grottos depict scenes from Jesus’ life.

Every year 50,000 people visit the shrine in the town of fewer than 700 residents. The grotto also has nonreligious appeal. Countless types of rocks and more than 250 types of semiprecious stones — from amethysts to drusy quartz — cover the grottos.

“There’s nothing like it in the world,” Marketing Director Andy Milam told the Des Moines Register last year. “You may find a little grotto built on the side of a church but not one the size of a city block.” 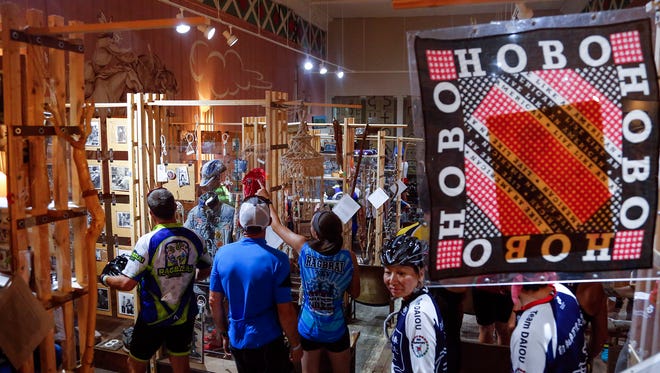 Britt is home to the National Hobo Museum, which preserves the history, artifacts and stories of hoboing in the historic Chief movie theater on Main Street. The museum was assembled in the 1970s ’80s and today is run by the Britt Hobo Days Association, a nonprofit that hosts the National Hobo Convention and the Hobo Days Festival each August.

This will be the Century Day, and the RAGBRAI route, usually open from 6 a.m. to 6 p.m., will be open for an extra hour, until 7 p.m. with increased SAG support.

RAGBRAI is working on plans to assist riders who cannot ride the full distance. Organizers anticipate more riders will use the SAG (support and gear) wagons on Day 4 than typical days.

“We know that we’re probably going to have a lot of sagging that day,” RAGBRAI Director Matt Phippen said in January. “But it’s a tribute to (co-founder John) Karras. There’s people who want that brought back.”

Fossil hunters tourists can search for 365 million-year-old fossils just west of Rockford. During the Devonian Period, warm, shallow seas covered Iowa. Most of the fossils found at the Fossil and Prairie Park Preserve are from marine invertebrates like brachiopods , gastropods, corals, crinoids, bryozoans and cephalopods.

Day 6: Visit Hawkeye on RAGBRAI for the second time in history

This will be RAGBRAI’s second trip to Hawkeye. The only other visit came when it was a pass-through town in 1996.

Day 7: Meet in the “Hometown of the World”

Postville, “The Hometown of the World,” is known for its diverse population, with migrants from a dozen countries drawn by jobs at its two meatpacking plants. The Agri Star plant is one of the largest kosher meat packing plants in the world, and among the town’s transplants is a cadre of Hasidic rabbis who certify its products.

Philip Joens covers breaking news and RAGBRAI for the Des Moines Register. He has ridden parts of 16 RAGBRAIs and completed the river-to-river trek five times. He can be reached at 515-443-3347 at pjoens@registermedia.com or on Twitter @Philip_Joens.